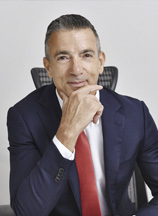 Marc Riviere entered the New South Wales Police at the age of 21. He was immediately identified as an excellent public speaker who was able to engage and identify with an audience.

I found myself in a position that required legal help and was referred to Marc by a work colleague who personally knew him. He was so professional and confident that he put my mind at ease and gave me the confidence that my matter would have a positive outcome in the circumstances. He helped get what I saw as the best possible outcome in my situation. Marc was also very well informed and made sure that I understood what was happening; he was a very nice person as well as a great lawyer. I would recommend his services to anyone out there searching for legal help!

A distinguished and practical career in criminal casework

Marc’s career path and achievements have helped him to become a solicitor who can offer both expertise and empathy. He will listen carefully to what clients have to say and then skilfully guide them through the legal maze.

Marc’s experience in the police force has given him a detailed understanding of criminal investigation procedures and forensic evidence; the type of evidence upon which many police cases hinge. He is an accomplished public speaker and has won area and regional public speaking contests with Toastmasters International.

Marc has completed his Diploma of Law and Graduate Certificate of Legal Practice. He works exclusively in the area of criminal law, but has also conducted care proceedings in the children’s court and has a detailed knowledge of procedures in the coroner’s court.

Marc Riviere entered the New South Wales Police force at the age of 21. He quickly proved himself as a natural and engaging public speaker and was seconded to the Community Relations Unit where he initiated the Neighbourhood Watch Programme and lectured at primary and high schools across NSW.

During almost 10 years of service as a CSI, Marc worked all over NSW, investigating matters including; murder, arson, suicide, motor vehicle accidents, break enter and steal and coroner’s investigations.

Marc was involved in major investigations and activities including:

Marc has received his Diploma in Applied Science (Forensic Investigations) through the Canberra Institute of Technology. He was awarded
Certificates for Outstanding Achievement in the following areas of study:

Marc was responsible for the day to day running of police prosecutions in the local court where he was able to apply his knowledge from investigation work to hearings.

Riviere Law won the 2013 Central Coast Business Excellence Award for Excellence in Business Ethics and qualified as a state finalist in this category.